The infamous night of rampant panic will return to life on October 30, 2021 with a two shows in Mt. Dora. Working with Good News Entertainment, the Positively Florida Theater Company production will closely mimic the original Mercury Theatre on the Air CBS radio program. "The War of the Worlds" was directed and narrated by famed actor and filmmaker Orson Welles as an adaptation of H.G. Wells’ 1898 novel. It was performed and broadcast live as a Halloween episode at 8 p.m. on Sunday, October 30, 1938, over the CBS radio network. The episode became famous for causing terror among its listening audience, though the scale of that terror is somewhat apocryphal. The show began like most radio entertainment of the day with live music, but the programming was interrupted by a series of fictional “breaking news” bulletins which some frightened listeners took for real. As the “invasion” spread, the fake CBS news team took over the broadcast, reporting the desperate situation developing in New York. Finally, the story settled into conventional radio drama with Welles as a survivor dealing with the aftermath of the invasion and the ongoing Martian occupation of Earth. Our adaptation will feature live music of the era, including vocals, with sound effects being created on stage as would have been done in the heyday of radio drama. 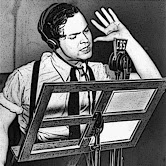